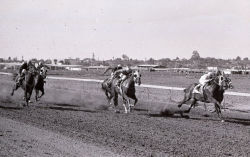 Rillito Race Track was built on Rukin Jelks’ stud farm. Jelks was one of the founders of modern Quarter Horse racing. With the help of another man, Melvin H. Haskell, Jelks created a track 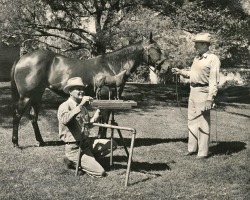 in his  backyard for him to race his personal horses. With the right people and more horses, official racing was brought to the track. Jelks and Haskell experimented with stakes races, graded races, futurities  and weighted handicaps—elements of races that exist to this day. Famous horses such as Shue Fly, Piggin String and Hard Twist raced at Rillito in its early years and the track experienced measured  success in the first several decades of its existence.

Thoroughbred racing was brought to the track in 1953 with the introduction of a five-eighth-mile oval to the existing straightaway. After some tumultuous years in the 1980s, the track was opened for Pima County Fair Racing in 1988 by the Pima County Horsemen’s Association, led by Howard King. That year, the large crowds Rillito had been known for came back. The racetrack faced some trying times during the 1990s and 2000s, but in 2011 cooperation with the county ensured that horse racing would continue as it has for the 2015 race meet.

The Rillito Park Foundation continues to manage the racetrack in addition to other park facilities including the Jelks Stud Farm house, the soccer fields and facilities for the farmers’ market.